On the morning of September 11th, more than 60 of our members launched our Development without Displacement campaign by attending the first City Council Meeting of the fall session. We announced our campaign with numbers, and showed our collective unity by filling the council chamber while wearing our new green Development without Displacement shirts. 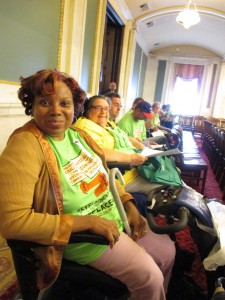 The goal of our action was to show City Council that our coalition consisting of many of the core community, disability, faith, labor, and urban agriculture groups as the Campaign to Take Back Vacant Land, is going to continue to fight for accessible affordable housing and fresh food production. Similar to our last campaign to pass a fair, accountable, and transparent Land Bank, we have joined together to pass a suite of legislation that can slow the tide of displacement that is sweeping over many of Philadelphia’s neighborhoods.

Our call to fight displacement in Philadelphia’s communities resonated with at least one council person. Councilman Kenyatta Johnson draped one of our shirts on the back of his chair in support of Development without Displacement. He also pleasantly surprised us by announcing and welcoming our coalition to the entire chamber. 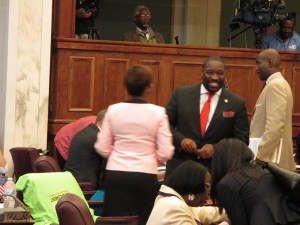 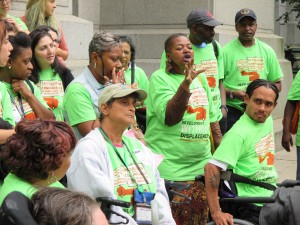 After the action we held a spirited debrief outside of City Hall. We’re excited to be working together to launch this campaign to ensure Development without Displacement!