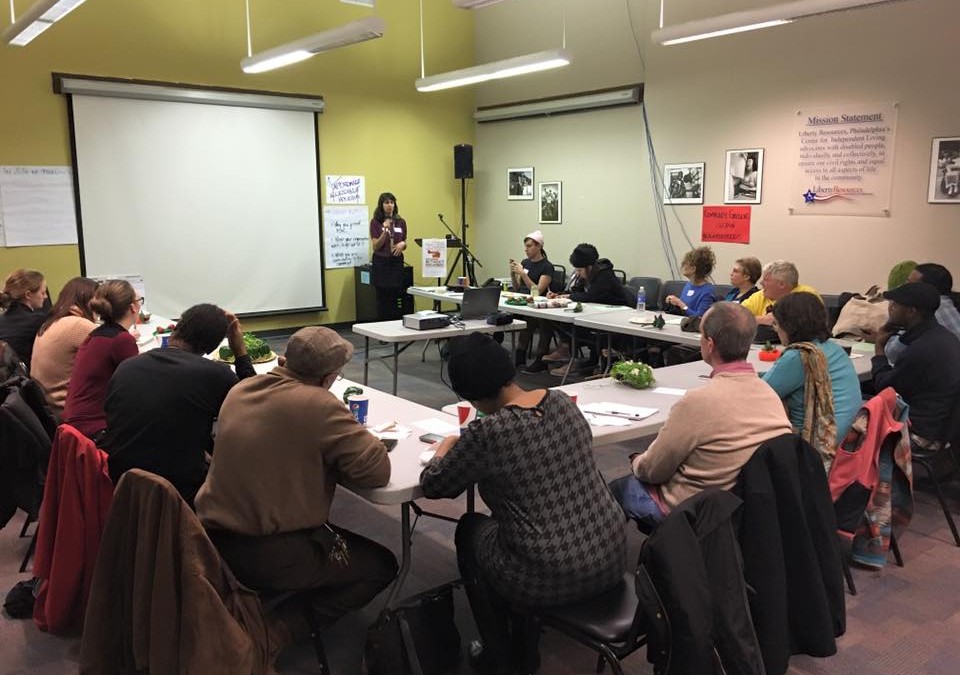 The State of our Coalition in 2015
The Philadelphia Coalition for Affordable Communities’ first membership meeting of the year, held on January 27, 2016, was filled to capacity. Together, we recounted highlights of our work in 2015, and began by celebrating the exciting growth of our Coalition in the past year, from 27 to 44 organizations!
We recalled our powerful press conference last March with 150 supporters! There, we unveiled new research and a policy proposal to increase funding to the Housing Trust Fund through an anti-speculation tax on the practice of flipping houses.

When City Council reconvened after its summer break, we rallied to urge Council to pass legislation without delay to increase affordable, accessible housing and green space. More than 85 Coalition supporters erupted in chants, demanding to know “Who will be our champion?” Before the meeting, we delivered petitions to Council’s Committee on Housing, Neighborhood Development and the Homeless, with signatures of 2,000 people in support of our demands.

Throughout the year, Coalition members continued organizing in our communities and continuing our advocacy. At Housing Trust Fund meetings, we presented our proposal on how we can increase funding and, at Land Bank hearings, we testified on the need to establish specific targets for affordable accessible housing and green space.

Housing For All in Washington, D.C. Wins $100 Million for Affordable Housing!
Our guest speaker, Elizabeth Falcon, Director of Housing Advocacy at the Washington, D.C.’s Coalition for Nonprofit Housing and Economic Development (CNHED), gave a tremendous presentation on their inspiring Housing For All Campaign.

How did the Campaign effect this sea change in public opinion and public policy?

At the outset, the Coalition realized that in order to secure the necessary scale of funding for affordable housing programs to make a meaningful impact, they needed to create the political will to make affordable housing a top priority. In order to achieve this, the Campaign deepened the involvement of the Coalition’s 140 member organizations, supported the leadership of residents impacted by the housing crisis, engaged a wide base of supporters, consistently engaged decision makers, and seized opportunities to secure critical wins for affordable housing.

The Campaign continually sought to build public awareness of the urgency of the housing crisis, the success of existing housing programs and the budgetary investments needed to expand them. The Coalition’s publication, A Decade of Progress, demonstrated the powerful impact of the Housing Trust Fund’s work in its first decade, and highlighted the number of affordable housing units built or preserved across every ward in the city, how many residents currently live in homes funded by the Trust Fund, and the projects built or preserved in each ward.

The Campaign convened Town Hall meetings throughout the city, sustained its presence throughout the budget cycle, grew its annual Housing For All Rally from 250 people to 700 people over the years, pressed former Mayor Vincent Gray to show leadership which he did by establishing the Comprehensive Housing Strategy Task Force, and made affordable housing a priority issue in the mayoral election. The Campaign achieved victory last spring upon passage of the new Mayor Muriel Bowser’s budget, which included the historic $100 million investment in the Trust Fund.

D.C.’s Housing Production Trust Fund is funded by 15% of deed recording fees and real estate transfer taxes. This year, $50 million is projected to be collected from these sources, and the city has allocated another $50 million from its genera fund in order to fulfill its $100 million commitment. With these funds, the Trust Fund is projected to renovate or create up to 1,000 new homes in the city.

For more information on D.C.’s victorious campaign, see Vision to Action: How CNHED’s Housing For All Campaign Led DC from Drastic Cuts to Momentous Investments in Affordable Housing, an interactive case study exploring the strategies and steps used to develop the Campaign, at: http://h4all.cnhed.org/ .